APHRODITE trumpets are an entirely new style, appealing to those who prefer a more elegant and lively sound. A special new HAMANAGA Valve System has been specially designed for this collection. The APHRODITE appeal to players who are after an elegant sound, quick response, and with outstanding flexibility.
Aphrodite was the Greek goddess of love and beauty. She was proud in her beauty, and according the legend, was chosen as the most beautiful of the three graces by Paris. The APHRODITE trumpets took their name from that of the enchanting goddess, and they are ultra-light weight models ― weighing less than 1kg.

The musical invention of Best Brass were the creation of founder, Shinji Hamanaga, and were created in the city of Hamamatsu in central Japan; a city famed for producing world-class musical instruments.
During his career at Yamaha Shinji designed almost every type of brass instrument from tubas to trumpets and was awarded 17 patents in brass design. In fact, trumpets designed Shinji were used by both trumpeters of Canadian Brass, Fred Mills and Ronald Romm, and horns designed by Shinji were used by Gerd Seifert and Johannes Ritzkowsky.
In 1999, as trumpet player himself, Shinji founded Best Brass with his dream in mind: “To create the world’s best trumpet.” This gave him total freedom to pursue his passion for innovation to create the highest quality trumpets; all powered by his remarkable talent and extensive experience.

This new design contains an answer for just about every issue of
conventional trumpets.

The valve structure is the most important part of a brass instrument, but each time you press a valve or use a combination of valves on a traditional trumpet, the tonal character and even response is changed. Shinji spent many years analyzing this problem and experimenting with possible solutions, until he finally came up with the HAMANAGA Valve System.
Though designed purely acoustic reasons, the HAMANAGA Valves are a unique feature which can be distinguished at a glance. The unit look string, yet precise, and visually represents the sound of a Best Brass trumpet.

The ideal taper design can be achieved.

Revolutionary in every aspect.

First of all, the rigidity of the casing itself was enhanced which substantially improves the efficiency and reduces a loss of sound in the extreme dynamics. In addition, the inner bore of the valves is in a straight line, and the valve ports are smooth with none of the irregularities found in orthodox valves.

Comparison with a conventional valve system.

Emblem engraved on the valve backside

Comparison with a conventional valve system

A revolutionary concept
The Groove Mouthpieces 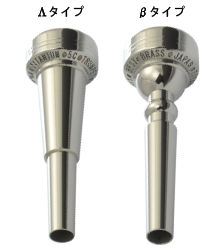 Here is the world first pure titanium mouthpiece using the M.I.M technology !
This totally-new product will be a great item for all the trumpeters who are looking for new sound.